Atlas Security’ area vehicle in Despatch received information of an Armed Robbery that occurred at a popular clothing store. Five suspects entered the store pretending to be customers; it was reported by staff that they were armed with knives and guns. Clothing and goods were stolen and they fled in a vehicle.

SAPS arrived on scene and apprehended two of the four suspects. Using the information provided by the staff of the store and the two suspects, Atlas Security Armed Response Officer, B18 and the SAPS searched the area close to where the first arrest was made and found the other two suspects hiding. All four suspects were taken into custody and all the stolen goods were recovered.

Additional clothing was found in the vehicle, which was not linked to the current robbery. The investigation will now continue with the SAPS. Well done to the SAPS and Atlas Security Armed Response Officer, B18

Criminals – we did warn, we’re ready for you! 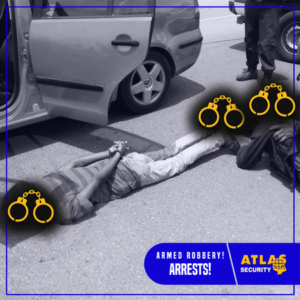