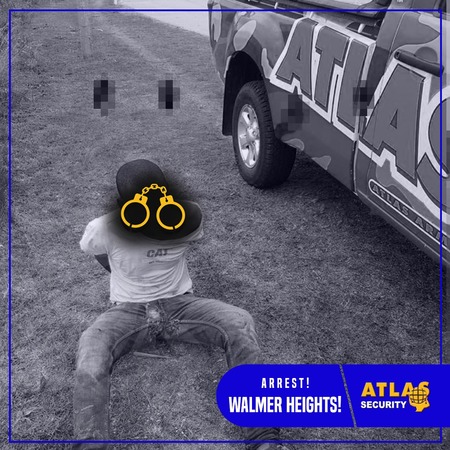 Strong community partnership one step ahead of suspects

An alert resident at a complex in Buffelsfontein/Titian Road, Walmer Heights, notified Atlas Security to two individuals along the boundary wall of the complex who seemed out of place.

Minutes after returning to their regular duties the Armed Response Officers noticed a separate group of Policemen chasing into a different bush area close-by. They went and assisted the SAPS who were responding to a burglary which had taken place at a non-alarmed premises a few minutes prior in Greenshields Park. The homeowner had arrived home to find 6 suspects in his premises and immediately contacted the SAPS. The swift response by the SAPS led to them apprehending 4 of the suspects and the recovery of items removed from the premises.

It was confirmed that the individual arrested by our Armed Response Officer in Walmer Heights was one of the suspects in this incident and was positively identified by the homeowner. The charges against him have now been changed from possession of possibly stolen items to housebreaking.

The linking of suspects to other crimes can only happen if cases are reported to the Police. Far too often we see community members opting not to open a case with the SAPS because it is thought to have been an “insignificant” offense. Trespassing, attempted burglary, attempted theft, etc. are all examples thereof. In some cases, the victim is of the opinion it’s just not worth all the effort to open a case. This incident goes to show that it is more likely that someone arrested or detained for an “insignificant” crime often has committed other more serious crimes already and may just be the individual the Police are looking for.

Thank you to the vigilant community member for alerting us. Well done to the SAPS for their quick response and the arrests they made. Atlas Security Armed Response Officers always do their best to make a difference out there – we thank them!