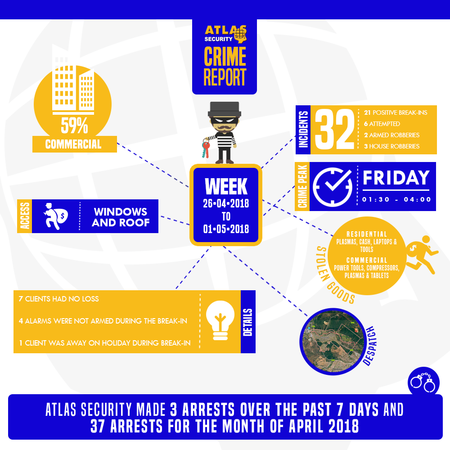 41incidents were reported to Atlas Security in the past week. 29 of them were positive burglaries, 4 attempted burglaries, 7 armed robberies and 1 house robbery.

The burglar’s most trending entry points have been:
• Windows
• Front door

The hotspots for the week:
• Newton Park
• Mangold Park

This week, residential properties suffered 55% of the positive incidents.

5 of our positive burglaries had no loss on site. 4 of these incidents had no entry gained.

Month to date, 34 arrests have been reported. We would like to thank the K9 unit, SAPS and Metro for all their assistance. Just for this week Atlas reported 9 arrests.

During the past week we managed to make an arrest using the CCTV that we monitor at one of the commercial properties. Our CCTV operator saw the suspect on the premises and notified our response officer. The officer was informed at all times of the whereabouts of the suspect, which led to the arrest and the goods retrieved.