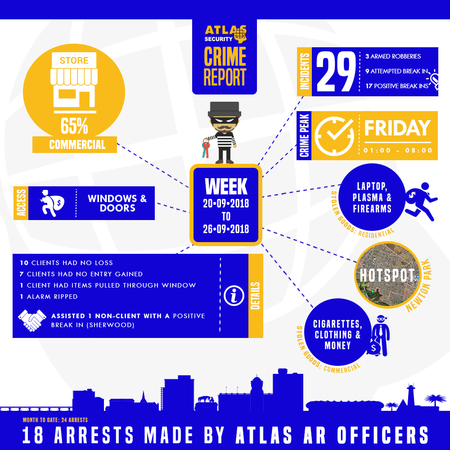 This week we are reporting on statistics from 20 to 26 September 2018.

In total 29 incidents were reported to Atlas Security in the past week. Of these, 17 were positive burglaries, 9 attempted burglaries and 3 armed robberies.

The most reported incidents happened on Friday morning between 01:00 and 08:00.

The highest trending items reported to have been stolen are:
• Laptops
• Cellphones
• Firearms

The burglars’ most trending entry points were:
• Front doors
• Back doors
• Windows

Hotspots for the week:
• Newton Park

This week, commercial properties suffered 65% of the reported incidents.

Ten of the positive burglaries had no loss on site. Seven of these also had no entry gained into the premises.

Trespassing incidents have been on the rise this past week. Click here to learn which preventative measures can be taken to bring this trend to a fall.

Month to date, 24 arrests have been made. Eighteen of these were made by Atlas Security Response Officers. We would like to thank the SAPS, Metro, K9 Unit as well as the community for assistance with cleaning up our streets and getting the criminals locked away.

With the school holidays starting tomorrow, stay safe and know that your world is secure in Atlas’ hands. 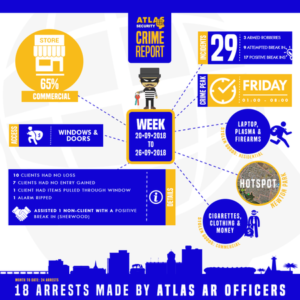