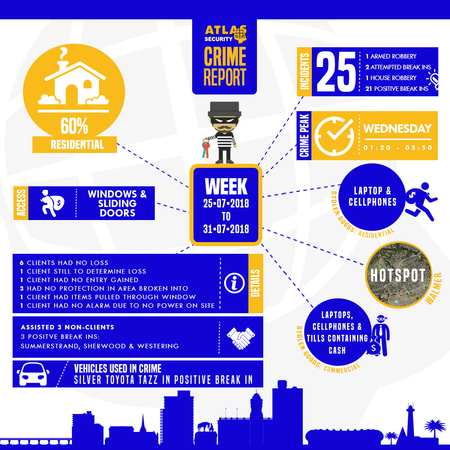 25 incidents were reported to Atlas Security during the past week. 21 of them were positive
burglaries, 2 attempted burglaries, 1 armed robbery and 1 house robbery.

The most reported incidents happened on a Wednesday morning between 01:20 – 05:50.

The highest trending items that have been stolen are:
• Cellphones
• Laptops

The burglar’s most trending entry points have been:
• Windows
• Sliding doors

The hotspot for the week:
• Walmer

This week, residential properties suffered 60% of the positive incidents.

6 of our positive burglaries had no loss on site. This week, we assisted 3 non-Atlas clients.
Three of the positive incidents where undetected due to no protection in the area where the burglars entered.

Monty Montgomery, Atlas Security Operations Manager, reported that a week after they hit one mall, the likelihood of them targeting another mall is very high. With the recent shooting at Greenacres Mall, Monty would like to warn all shoppers to be alert of suspicious activity. This shooting followed a huge loss at a shop in Walmer Park Shopping Centre.

Both robberies were cellphone shops – please know that they are being targeted, so take extra caution. 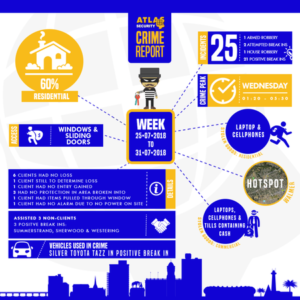