This week Monty Montgomery, Atlas Operations Manager, shares that Atlas Response Officers have made some 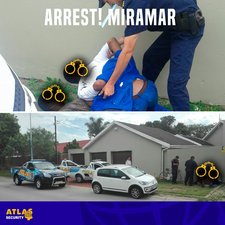 brilliant arrests this week. Thus far 10 arrests have been made for the month of April for various crimes in Nelson Mandela Bay.

“We believe this spike in arrests is due to the active show of force by Atlas,” remarks Monty Montgomery. “Working closely with Neighbourhood Watch groups, our control room monitoring and community security WhatsApp groups, all have contributed to these arrests.”

Monty also wishes to remind readers about the importance of opening a case with the Police after a crime has been committed. In most instances, the Police have to release arrested villains due to victims opting to not open a case. The repercussions of these actions send out a clear message to criminals.

Roof burglaries are still actively taking place where criminals are disabling alarms. Monty wish to inform readers how clever criminals are. They plan their intrusions very carefully – obviously around the burglar alarm system, so that they can go about their work without any interruptions. Their mission is to bypass the burglar alarm system. Ask yourself the question: How old are your passive infrared detectors (PIRs)? Passive infrared detectors or PIRs are one of the key elements of your alarm system. They have microwave detectors installed which detect changes in infrared radiation impinging on them.

Monty shares that vagrants are becoming a nuisance in many areas. He reports that the average vagrant will do whatever they need to survive.

Atlas is continuously showing visibility, as a deterrent to those who may have criminal intentions, “nudging” them out of the area or dissuading them from carrying out their criminal activities. We also convey these calls to the SAPS as they are in a position to question the intent of an individual. A very important rule is to make sure that you’ve beefed up their perimeter security – to keep the vagrants off your property.

Monty also advises that you only dispose of your garbage bags on the days that the Municipality collects. Preferably only take your bags out on the morning of collection, and as late as possible if someone is home to do so. Leaving the bags out overnight or outside for too long is an invitation and will definitely attract vagrants.

If you do have all the necessary barriers in place, as Monty recommends, remember to test them regularly. To test your alarm call Atlas today on 0861 585 585 to perform a “walk” test of your alarm system, or you can schedule a technician to test your alarm and address any faults.

Should you ever find yourself in an emergency situation, please rely on your panic button to summons our response, rather than attempting to phone into our call centre in order to do so. A panic signal carries the highest priority within our control centre and will certainly be the fastest form of response.

This week, Monty pleads with all readers to look out for their elderly family members following the recent horrific attack on an elderly lady.

Make sure that they have an alarm system and know how to use it during the day and night. Ensure that they have a safe room where they lock themselves in, should they find themselves in an emergency. The elderly must please be aware of people knocking on doors while they are alone at home during the day, as they might have the intention of sussing out houses. The last thing we want happen is for them to be unexpectedly surprised by someone next to their bed.