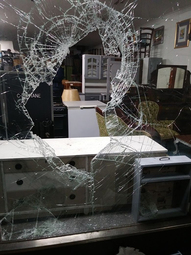 conjunction with your burglar alarm system. Gates, fences, doors and burglar proofing is not only a necessity, but must also be sturdy and durable.

Monty urges readers to look at their situation in detail and to seriously consider adding extra layers should there be a lack thereof. Make sure that your property is properly secured. He adds that sliding doors are also extreme weak entry points. Criminals love breaking through sliding doors as it’s so easy.

Monty explains that burglars are still breaking into roof spaces via bathroom windows. Subscribers must realize and know that criminals are very clever. They plan their intrusions very carefully – obviously around the burglar alarm system so that they can go about their work without any interruptions which, most of the time, have a disastrous outcome. Their mission is to bypass the burglar alarm system and then return later to empty the house.

He adds that this is why he urges readers to go the extra mile and have double security measures in place. These security measures are very affordable and won’t cost you an arm and a leg. This means doubling up on your burglar alarm equipment and installing the latest equipment. He also reminds readers to have a trustworthy keyholder.

Home invasions: Monty shares that home invasions are extremely traumatic and doesn’t wish this experience on 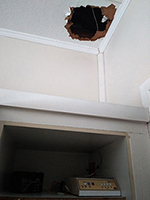 anyone, as these perpetrators leave families in a state of shock when their private space is invaded.

Armed robberies: Still a daily occurrence and rising. Be careful when entering shops and malls.

Hijackings: Monty shares that there has been many attempted hijackings, but victims managed to prevent it by not entering their homes and driving away.

Theft out of motor vehicles: This crime is rife at the moment. It is mostly taking place along the beach front, where runners park their vehicles, at restaurants and at shops. DO NOT leave valuables in your motor vehicle.

Lastly Children Safety: Monty strongly urges schools, parents and community to look out for scholars following this week’s incident where a teenager was attacked on her way to school. Teach your children not to take short cuts to school and not to talk to strangers. Please be aware and keep your children as safe as you possibly can. Look after each other – if you see something that seems odd, report it – it takes a community to raise children.

Here are some pointers for parents:

• Train your child from an early talking age that they should never let a stranger touch them and should scream as loudly as possible if someone tries.
• When shopping, ensure that you have eyes on your children at all times – whether in a trolley or walking. If they are walking, you should insist on holding their hand so that they stay at your side at all times.
• Be alert when dropping and fetching your children from school – often would-be abductors are standing not even 200m away surveying the scene – if you are suspicious, report the person to the school and the SAPS.
• Make sure that the school has a policy regarding the collection of, particularly, very young children – they may not allow your child leave the premises with someone that they are not familiar with, especially without notification from you.
• Crèches, daycare and aftercare facilities should always keep their front gate locked and only allow known persons into the premises.
• Always inform your daycare or aftercare if someone other than yourself will be fetching your children and, where possible, provide a picture.
• Talk to older children and teenagers about the dangers of having their cellphone visible and also not being aware of their surroundings while ‘playing’ on the phone.
• Educate your children about ‘safe houses’ – people they can trust in the neighbourhood or shopping precincts where they can raise an alarm if they are threatened.
• Teach your children to trust their sixth sense regarding the distrust of strangers.
• The old adage of ‘never taking sweets from strangers’ couldn’t be truer now.
• Tell grandparents and other childcare givers your rules around safety and how you are educating your children.
• Minors should not be allowed to walk in public areas unless accompanied by a responsible adult.
• Teenagers should stay in groups and always tell an adult where they are going and what time they are expected to be back.
• Give your teenagers lifts to and from parties, gatherings at the mall, the beach etc so that you know exactly where they are.