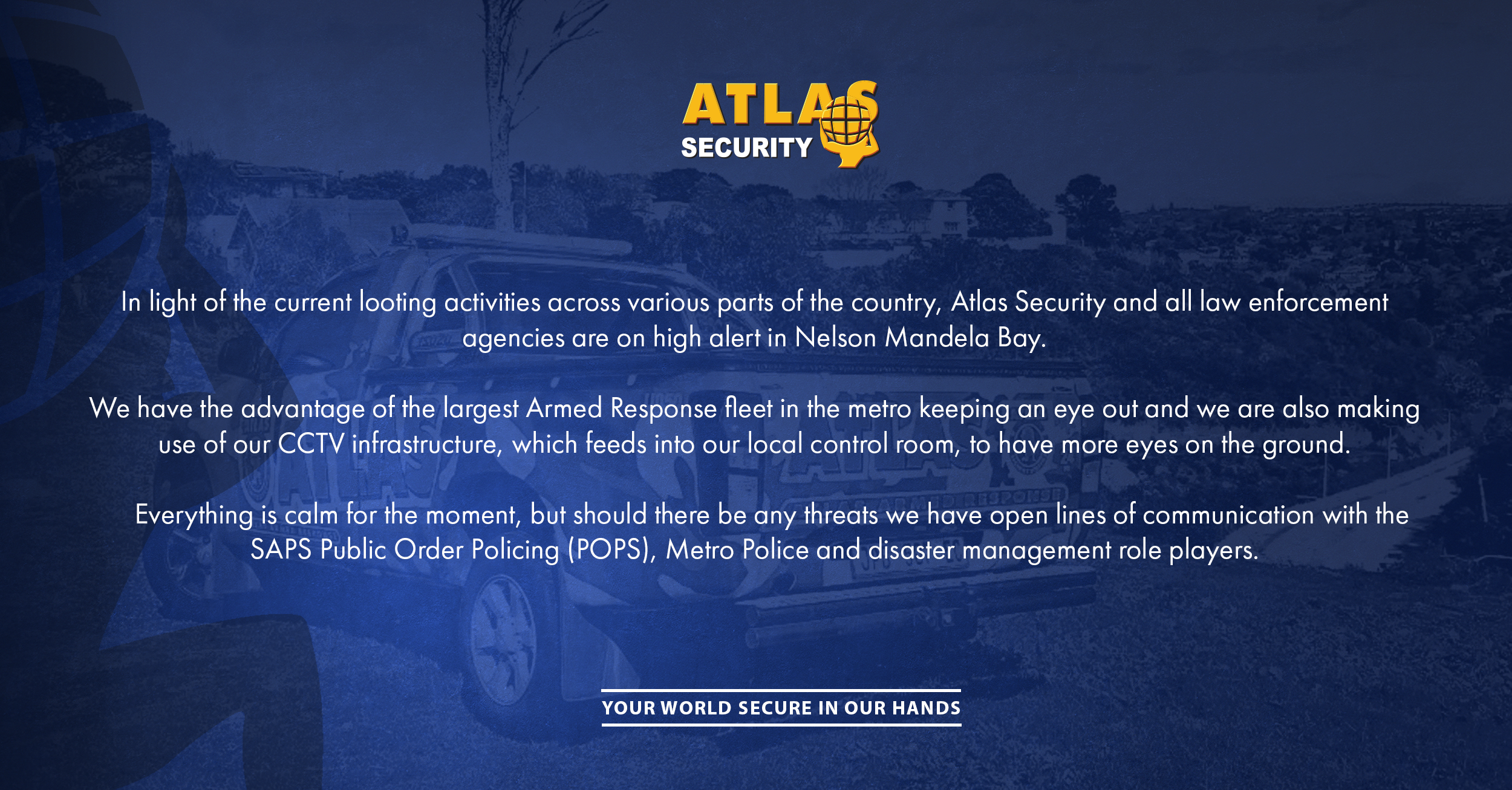 Although the current riots and looting are predominantly occurring in the KZN and Gauteng Provinces, we at Atlas Security believe it is better to be prepared and grateful, if it doesn’t spill over into our area, than unprepared, should it start occurring in the Nelson Mandela Metro Municipal precinct as well.

As a Private Security Service provider, our authority is limited to private property and persons and Atlas Security will not be in a position to police public spaces, unless called upon to do so with the authority of the National Police Commissioner.

Where it pertains to our clients and their private property, Atlas Security will continue responding to alarm activations, in accordance with our standard operating procedures. Should a response officer however, arrive at an alarm activation and find that the cause thereof is due to rioting / looting, the response officer will assess the situation. Each situation will potentially differ from the next in this regard. Where it is believed that additional resources from Atlas Security could mitigate further damage or loss to a client’s property, the response officer will request such “backup” via radio communication.

With one of the largest, if not the largest, response infrastructures in the province, we have the ability to render support to any one of our vehicles in a moment’s notice.

It is important however to understand that, dealing with riots, looting, etc. which is conducted by masses, versus a normal burglary event, is very different in that, in most burglary events one encounters a limited number of perpetrators, usually between 1 & 4 whereas in a looting / rioting situation this number can be in the hundreds.

Where incidents are encountered, by our response officers, which involve large numbers of the public looting at a client’s premises, our response officers will immediately inform our control room who have direct access to the SAPS Public Order Policing Commander as well as the Disaster Management Centre, to inform them and request deployment of authoritative personnel to these events. In addition to this, our control centre is able to request the dispatching of Fire Services as well as Medical Response, where it may be deemed necessary.

Please note that, panic signals received, will always result in the response vehicle being dispatched immediately whilst simultaneously our control room will phone your nominated key holders / premises, in order to establish the cause of the activation and what the situation is on site.

Many times we are asked why we phone for a panic activation. The reality is, although the national average response time is 15 minutes, we aim to achieve 10 minutes or less anywhere within our response area of the Nelson Mandela Bay Metro.

Knowing that a medical emergency was the cause of the panic activation, for example, by being able to verify the cause of the activation telephonically, while our vehicle is en-route, eliminates unnecessary delays in dispatching such emergency services which may be required. Waiting first for our response officer to arrive on-site, before being made aware of emergency services being needed will be a waste of valuable time, especially in dire situations.

In the event of an emergency, please utilize your panic button as these signals are prioritized over all other signals. A telephone call to our control room is not quicker or easier than using your panic button.