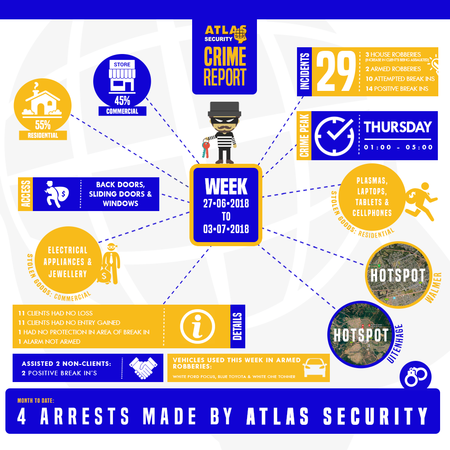 29 incidents were reported to Atlas Security in the past week. 14 of them were positive burglaries, 10 attempted burglaries, 2 armed robberies and 3 house robberies.

The most reported incidents happened on a Thursday morning between 01:00 – 05:00.

The highest trending items that have been stolen are:
• Plasma TV’S
• Jewellery
• Laptops
• Cellphones
• Tablets

The burglar’s most trending entry points have been:
• Back doors
• Sliding doors
• Windows

The hotspots for the week:
• Walmer
• Uitenhage

This week, residential properties suffered 55% of the positive incidents.

11 of the 14 positive burglaries had no loss on site. It has been reported that there is an increase in assaults during house robberies. Monty Montgomery urges all clients to make sure you have a safe room in case of emergency and the necessary alarm equipment handy e.g. Remote panics.

Although we have had an immense increase in attempted burglaries, we are pleased to say that the reason most of them were unsuccessful, is because they were disturbed by an alarm activation, vigilant client or a security measure like a security gate or sufficient alarm protection.

Month to date 5 arrests have been reported – 4 of these were made by Atlas Security Response Officers. We would like to thank the Metro, SAPS and community for their assistance. 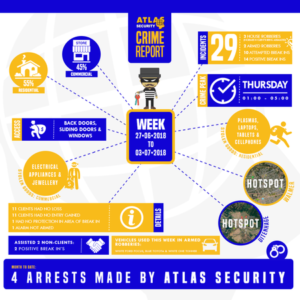