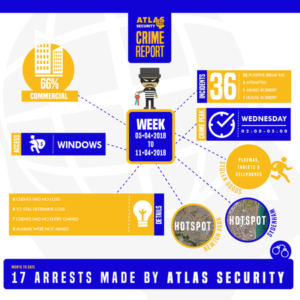 36 incidents were reported to Atlas Security in the past week. 32 of them were positive burglaries, 2 attempted burglaries, 1 armed robbery and 1 house robbery.

The most reported incidents happened on a Wednesday morning between 02:00 – 05:00.

The burglar’s most trending entry points have been:
• Windows

The hotspots for the week:
• Newton Park
• Sydenham

This week, commercial properties suffered 66% of the positive incidents.

8 of our positive burglaries had no loss on site. 2 of these incidents had no entry gained.

Month to date, 12 arrests have been reported. We would like to thank the K9 unit, SAPS and Metro for all their assistance.

We would like to urge all subscribers to open a case when suspects are caught. When we find suspects that are known for specific burglaries, we cannot have them arrested and charged if no cases are opened. This will “encourage” their next venture into one of our homes or business properties.

The armed robberies and house robberies around the NBM have decreased dramatically. We would like to thank all our active subscribers for being vigilant and always notifying us of any suspicious activity. The presence of cameras has helped us pick up suspicious vehicles and people, which in turn has kept them out of our areas. Active patrols and visibility have also added to this success.

#Your world secure in Atlas’ hands