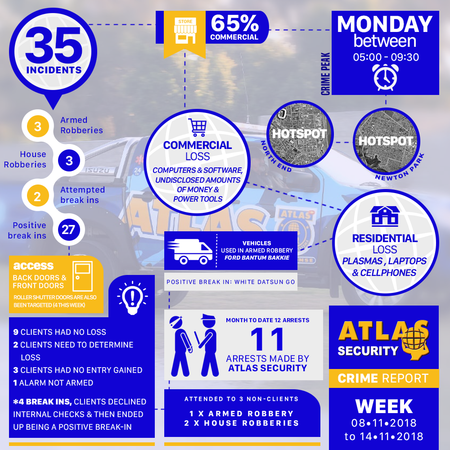 This week we are reporting on statistics from 8 to 14 November 2018.

Commercial properties once again came under attack, with incidents at businesses representing 65% of the week’s reported cases.

In total 35 incidents were reported to Atlas Security during the period in question. Of these, 27 were positive burglaries, two attempted burglaries, three armed robberies and three house robberies.

The most reported incidents happened on Monday morning between 05:00 and 09:30.

The highest trending items reported to have been stolen are:
• Plasma TV’s
• Laptops
• Cellphones

The burglars’ most trending entry points were:
• Front doors
• Back doors

Nine of the positive burglaries had no loss on site. Three of these also had no entry gained into the premises.

Four clients who declined an internal check of their premises and/or buildings – after our Control Room received signals from their alarm systems – had to face the unfortunate reality that the signals had indeed been as a result of burglaries at those premises.

Month to date 11 arrests have been made by Atlas Security Armed Response Officers. We would like to thank the community, SAPS, K9 unit and Metro for their continued assistance.