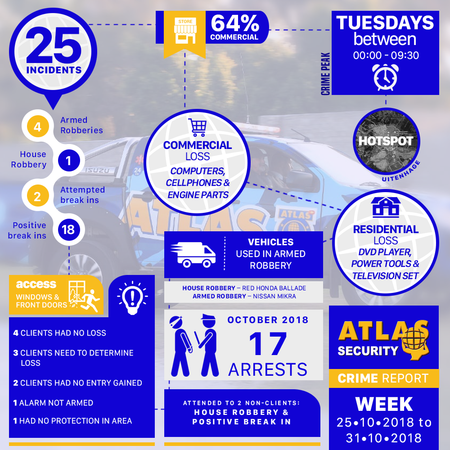 Residents in the Overbaakens area fell victim to a steep rise in crime this week. Even though no Atlas Security clients were targeted during the recent incidents, we would like to warn our clients that the area seems to be a new hotspot. (Click on the link at the bottom to learn more)

In total 25 incidents were reported to Atlas Security in the past week. Of these, 18 were positive burglaries, two attempted burglaries, four armed robberies and one house robbery.

The most reported incidents happened on Tuesday morning between 00:00 and 09:30.

The highest trending items reported to have been stolen are:
• DVD Players
• Powel Tools
• Television Sets

The burglars’ most trending entry points were:
• Windows
• Front Doors

Hotspots for the week:
• Uitenhage

This week, commercial properties suffered 64% of the reported incidents.

Four of the positive burglaries had no loss on site. Two of these also had no entry gained into the premises.

Month to date 17 arrests were made by Atlas Security Armed Response Officers. We would like to thank the community, SAPS, K9 unit and Metro for their continued assistance.

The Overbaakens area is currently experiencing a hike in crime. Click to read more 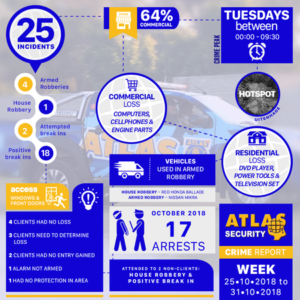