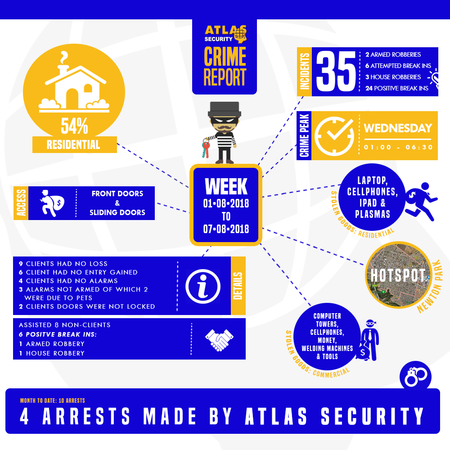 This week we will be reporting on statistics from the 1st August 2018 and ending the 07th August 2018.

35 incidents were reported to Atlas Security in the past week. 24 of them were positive burglaries, 6 attempted burglaries, 2 armed robberies and 3 house robberies.

The most reported incidents happened on a Wednesday morning between 01:00 – 06:30.

The highest trending items that have been stolen are:
• Laptops
• Cellphones
• IPads
• Plasma TV’s

The burglar’s most trending entry points have been:
• Front doors
• Sliding doors

The hotspot for the week:
• Newton Park

This week, residential properties suffered 54% of the positive incidents.

6 of our clients had no entry gained, 3 alarms were not armed due to pets inside the house and 2 client’s doors were not locked.

Month to date, 10 arrests have been made. 4 of these were made by Atlas Security Response Officers. We would like to thank the SAPS, Metro, K9 unit as well as the community for all their help in cleaning up our streets and getting the criminals locked away.

Atlas Security would like to commend our clients and members of the public for being so vigilant and for taking a stand. The amount of calls we have received from clients who have either stopped burglaries, caught suspects or assisted in an arrest has been impeccable.

“When we learn how to work together, things just might start getting better!” 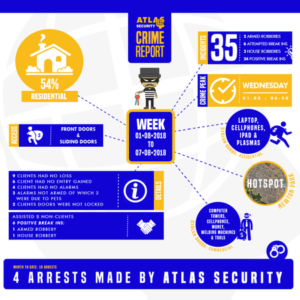