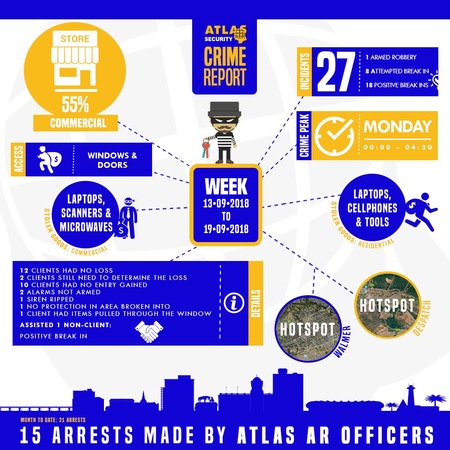 This week we are reporting on statistics from 13 to 19 September 2018.

In total 27 incidents were reported to Atlas Security in the past week. Of these, 18 were positive burglaries, 8 attempted burglaries and 1 armed robbery.

The most reported incidents happened on Monday morning between 00:00 and 04:20.

The highest trending items reported to have been stolen are:
• Laptops
• Cellphones
• Tools

The burglars’ most trending entry points were:
• Front door
• Back door
• Windows

Hotspots for the week:
• Despatch
• Walmer

This week, commercial properties suffered 55% of the reported incidents.

Twelve of the positive burglaries had no loss on site. Ten of these also had no entry gained into the premises.

Month to date, 21 arrests have been made. Fifteen of these were made by Atlas Security Response Officers. We would like to thank the SAPS, Metro, K9 Unit as well as the community for assistance with cleaning up our streets and getting the criminals locked away.

Please take caution when leaving your garage door open – a lot of theft this week was as a result of this specific reason. 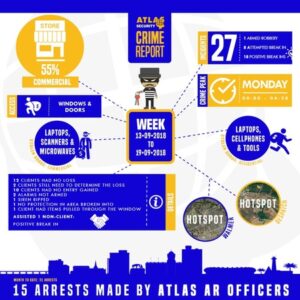