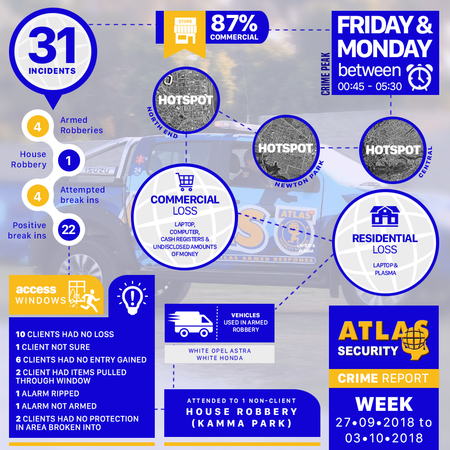 This week we are reporting on statistics from 27 September to 3 October 2018.

In total 31 incidents were reported to Atlas Security in the past week. Of these, 22 were positive burglaries, 4 attempted burglaries, 4 armed robberies and 1 house robbery.

The most reported incidents happened on Monday and Friday morning between 00:45 and 05:30.

The highest trending items reported to have been stolen are:
• Laptops
• Plasma TV’s

The burglars’ most trending entry points were:
• Windows

This week, commercial properties suffered 87% of the reported incidents.

Ten of the positive burglaries had no loss on site. Six of these also had no entry gained into the premises.